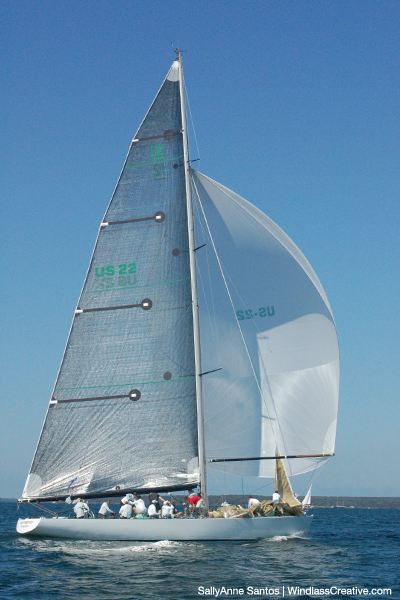 1967-1971
Intrepid was a breakthrough design in the history of yachting and the 12 Metre Class. Olin Stephens aim was to reduce the wetted surface by cutting away the keel at the aft end and redistributing the saved volume in the after line of the hull. Not only were her hull lines completely innovative, she also had the first fin and skeg configuration with a trim tab at the aft end of the keel combined with the rudder and the same steering mechanism. A new deck layout moved the crew below decks allowing for the boom to be lower to the deck which added greater stability. The rig was also innovative with a bending boom and top sections of the mast made of titanium. Intrepid outclassed Dame Pattie by a score of 4-0 easily winning the 1967 America’s Cup. For the 1970 Cup Defense she was was modified by Britton Chance. Her keel was redesigned and recast, she was given a longer waterline, a reduced wetted area and her weight increased. She became the second yacht (after Columbia 1899 and 1901) to successfully defend the America’s Cup twice, the first 12 metre to do so. Intrepid won the Caritas Cup (NYYC) in 1970 and the Chandler Hovey Gold Bowl (NYYC) in 1967 and 1970.

1971-1996
Intrepid had many home ports from Miami, FL to Seattle, WA to Monaco, FRA where she was briefly owned by the L’Association Francaise pour La Coupe de l’Amerique (Marcel Bich) in 1979. From there she was returned to the US to Luskegon MI, renamed Windancer and was hired for charters on Lake Champlain. In 1993, Intrepid Sailing Inc. brought her to Seekonk, MA, she was run aground on the Nantucket breakwater in 1994.

1996-present
Now owned by Intrepid Charters LLC (John P. Curtain, Jr.) she was completely rebuilt at Brewer’s Cove Haven Marina in Barrington, RI under the direction of Herb Marshall (American Eagle) and George Hill (Weatherly) of America’s Cup Charters. She had a new deck and deck beams, floor timbers, ring frames, bottom planking and ballast keel. She is actively sailed and raced in the Newport fleet.